a visit to the greenbrier

I had such a marvelous time at the Greenbrier this weekend!  My sweet hubby knew that I wanted to attend the High Style with Dorothy Draper event, so he up and surprised me with reservations.  It was every bit of what I had anticipated, and I’ll probably be regaling you with tales of the Greenbrier for weeks to come.

For those of you who aren’t familiar with Dorothy Draper, suffice it to say that she really created interior design as a profession.  As a female business owner in the early 1920s, she was a woman way ahead of her time.  She invented “Modern Baroque,” a style that is still relevant and inspirational today.  (Kelly Wearstler, anyone?)  Dorothy authored books on decorating and entertaining, wrote a monthly column for Good Housekeeping, and designed everything from airplanes and automobiles to cosmetics packaging and – of course – fabrics and furniture.  (Martha Stewart, anyone?)  Everyone wanted to be “Draperized,” and Dorothy astutely capitalized on that by licensing her name.

Dorothy was at the height of her fame when she decorated the Greenbrier after the end of World War II.  How to describe Dorothy’s style?  Just think cabbage roses, bright colors (used in innovative combinations) and lots of pattern mixing.  Well, that’s the tip of the iceberg, anyway.

Dorothy retired in the 1960s, but her firm, Dorothy Draper & Company, Inc., is still going strong in the skillful hands of Carleton Varney, one of America’s best known interior designers and an icon in his own right.  Carleton has decorated the Greenbrier for over thirty years.  The Greenbrier will soon unveil a new casino, an additional restaurant (appropriately named Cafe Carleton) and other newly renovated spaces, all decorated by Carleton.

So, let me kick off my tales of the Greenbrier by bringing you along for a tour.  While it won’t be the same as having Carleton as a tour guide, I’ll do my very best!

Here we are entering the Upper Lobby.  Notice the beautiful arched doorway with the inside millwork.  Dorothy thought doorways and mantels were very important – and treated them as such! 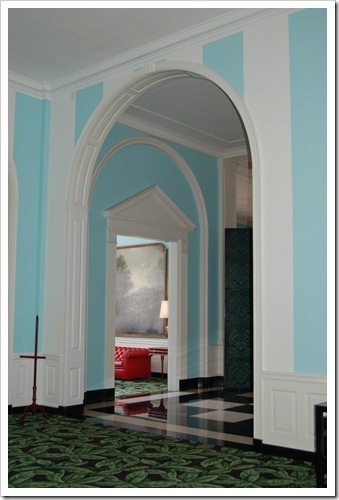 Fazenda Lilly, the floral fabric used in the Upper Lobby, creates the melody of the Greenbrier’s decor.  You’ll see how greens, blues, lavenders, reds, and pinks – all originating from this particular fabric— are carried from room to room.  The black and white checkerboard floor is another Draper signature. 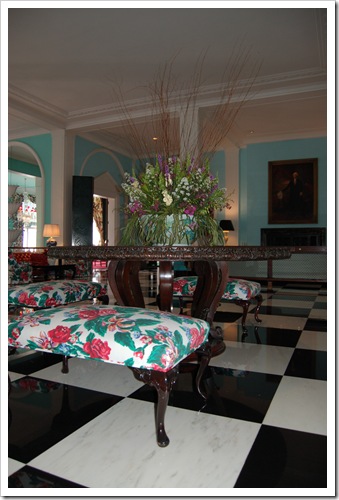 Dorothy was quite inspired by Thomas Jefferson’s Monticello …

… and copied this blue from the blue used on the porch ceilings at Monticello.  To Dorothy, her blue was the “perfect neutral.”  I feel the same way; it’s my favorite color! 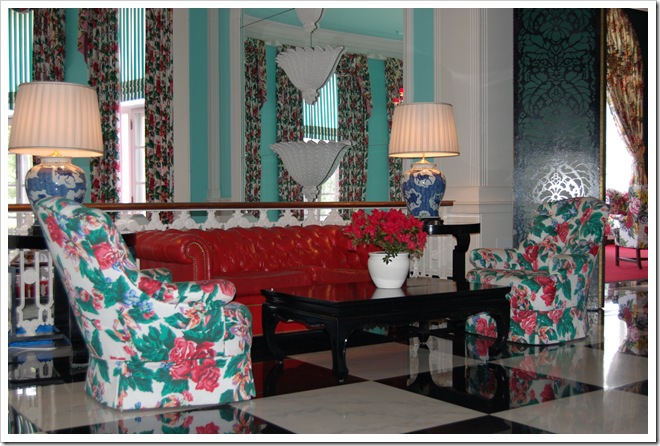 According to Carleton, Dorothy was quite offended when Tiffany & Co. had the nerve to steal her blue for their now-legendary little blue boxes.  I love this combination of red and Dorothy blue; it’s been one of my favorites for a while now … and is soon to be used in my twins’ big boy room! 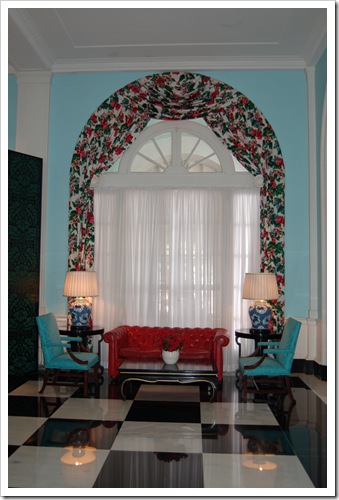 Adjacent to the Upper Lobby is the Victorian Writing Room, one of the most photographed rooms in America.  Here Dorothy used a floral designed especially for the Greenbrier, named Fudge Apron.  The pattern reminded Dorothy of a grandmother who had fudge and all sorts of jams on her apron … hence the name, “Fudge Apron.” 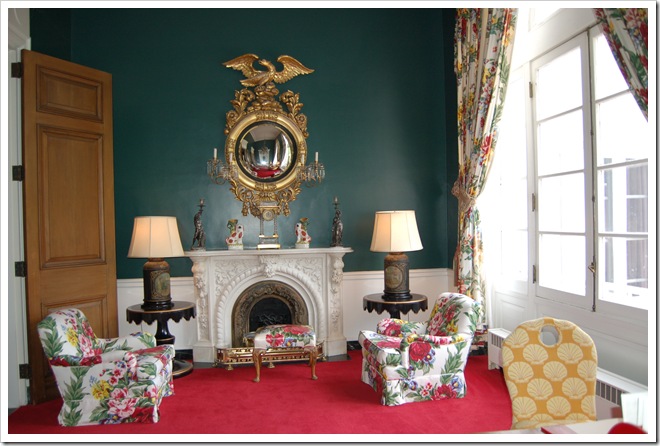 Love the pattern?  You’re in luck because Carleton has used it in a comforter set for his HSN collection!  You can also buy Fudge Apron and other Draper/Varney fabrics by the yard here … so let your imagination run wild.  Dorothy was very inspired by imagination and would certainly approve!

… and you can see the stacks of Greenbrier stationery just waiting for guests to be inspired. 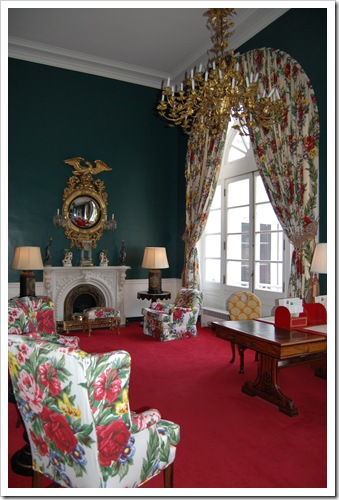 Here’s a peek into the Lobby Bar from the Upper Lobby … and notice the incredible pediment on the doorway inside the Lobby Bar. As I mentioned above, doorways were very important to Dorothy – and this is a spectacular example of that.  Also, be sure to appreciate the crescendo of color as you gaze through three rooms. 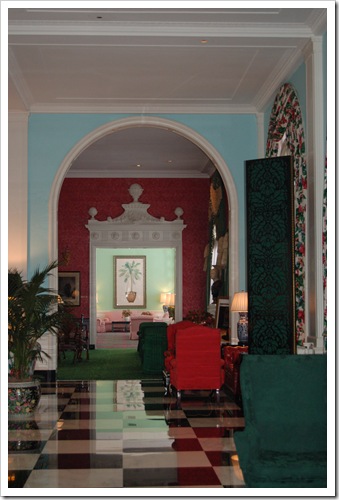 Dorothy was very inspired by a visit she made to the pope … and replicated the graceful draping of a bishop’s sleeve with the large swags in the window treatments. 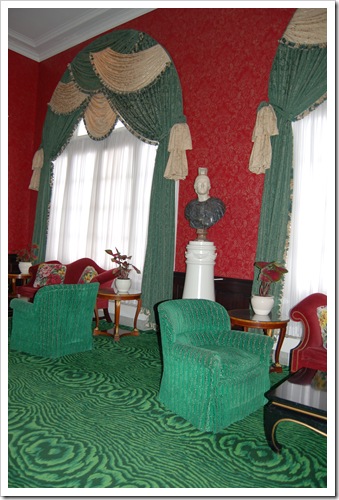 The carpet was specially designed and almost has the look of a moiré fabric.  Notice the pagoda light fixture … which echoes the doorway pediment.  Dorothy was adamant that her public spaces, such as these, not feel like a commercial establishment.  (While saying this, I picture a turned up nose.)   As such, the Lobby Bar is decorated more like a private home, with sitting areas and game tables, as opposed to tables lined up for service. 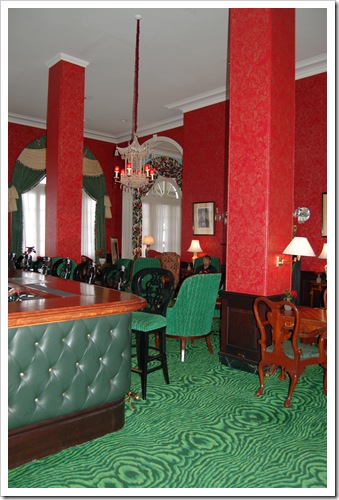 Moving into the Trellis Lobby, the palette grows lighter and the flooring returns to Dorothy’s favorite checkerboard. 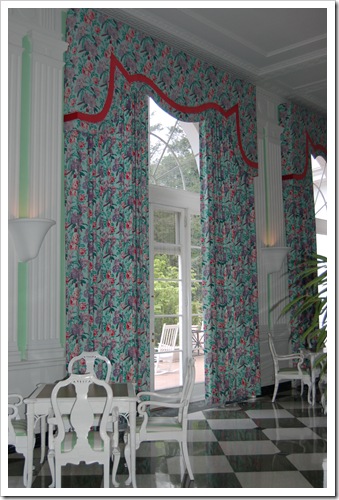 The striping detail on the furniture – shown below with the green striping on the white painted table – is another signature Draper touch. 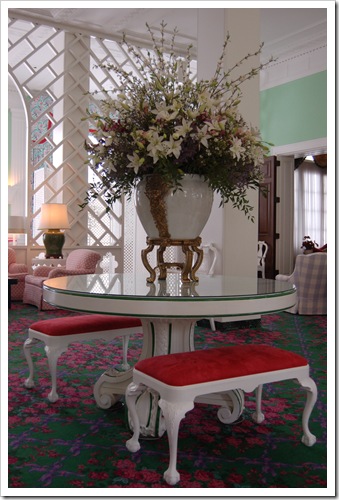 Dorothy loved the eagle motif … and interestingly, her eagles always looked to the left. 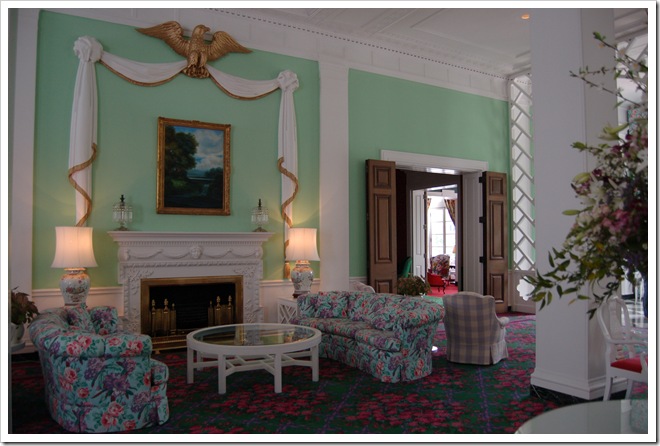 The floor to ceiling interior trellises define the space visually but keep the open, airy feeling of the large, high-ceilinged room. 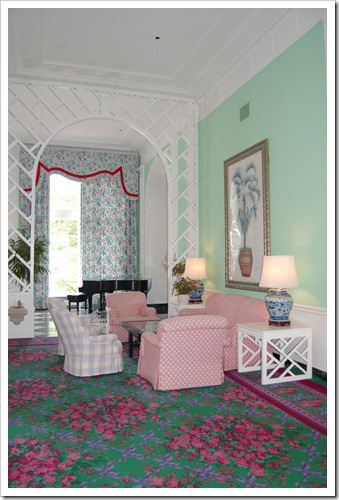 Adjacent to the Trellis Lobby is the amazing Cameo Ballroom.  One look at the incredible detail on the ceiling, and you know why it’s named the Cameo Ballroom. 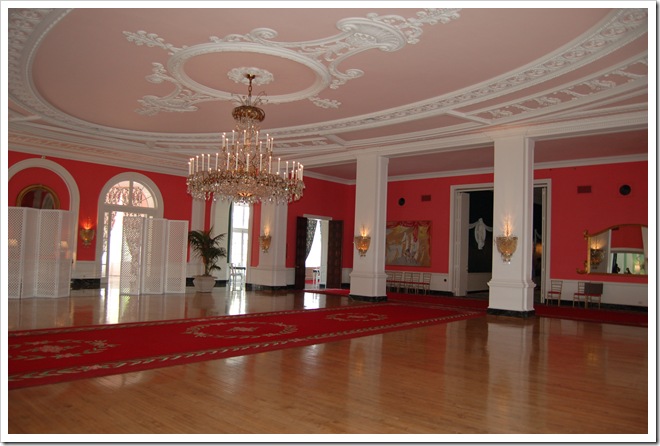 Dorothy – born into a wealthy family – had no formal education but instead learned at the hand of private tutors.  Dorothy’s love of the cameo and other classical motifs (such as the Greek key, seen in other millwork at the Greenbrier) comes from her privileged background, both where she grew up and how she lived. 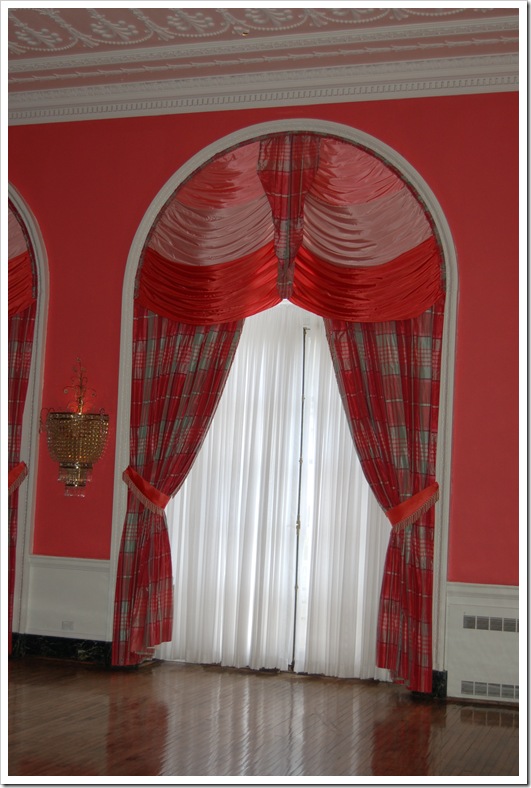 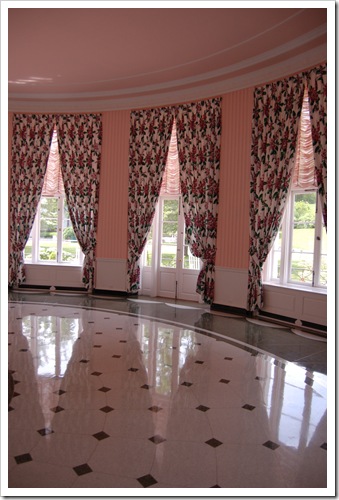 The Hall of Presidents is lined with these incredible busts, connected by swags – which are all the more prominent against the dark green walls.  Never fear, though!  With the floral and trellis-patterned carpet, the hall is far from somber. 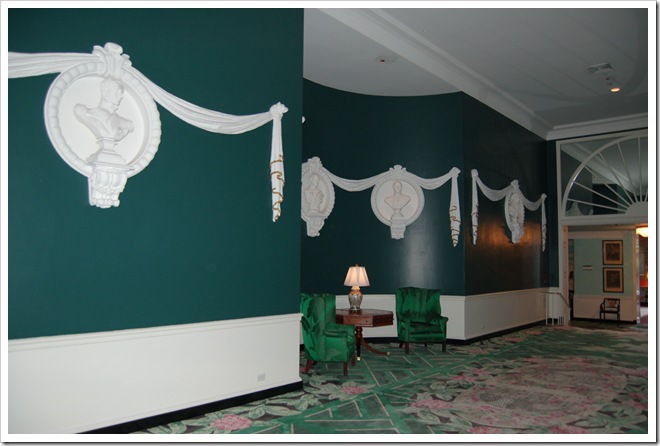 Moving into the North Parlor, we once again see the millwork details on the doorway.  This doorway is (seems?) somewhat lower than the other earlier, grander passageways – but the millwork shows just as much attention to detail.  And just wait until you see the other side! 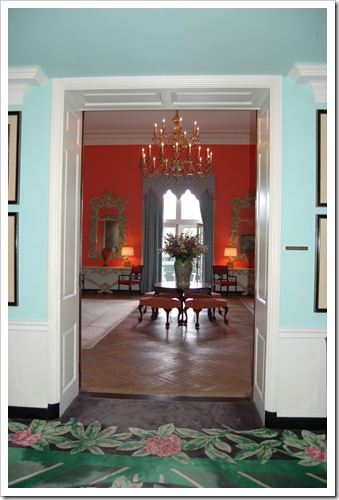 One of the most striking features in the North Parlor is the coromandel screen, which was originally chosen by Dorothy.  As you might imagine, the screen is quite a very valuable antique today … which I find quite hilarious considering Dorothy’s overall irreverence towards antiques.  After all, this is the woman who told Edward R. Murrow, “We are no respecters for whether things are old or not.  We just cut them if it looks better. … We cut legs off tables, shorten them, heighten them, do anything we want.” 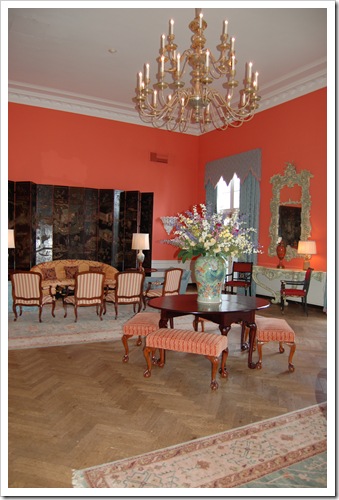 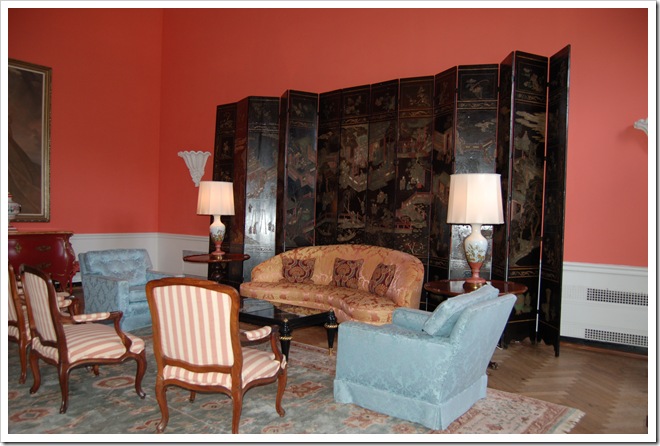 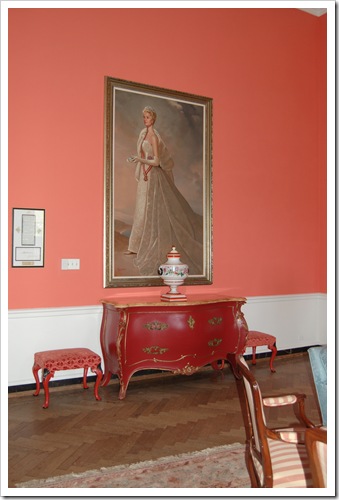 Remember my comment about Dorothy’s irreverence toward antiques?  Notice the pair of paintings on either side of the fireplace.  Beautiful, aren’t they?  Well, apparently they started life as one painting.  But Dorothy needed a pair … so she simply sliced the painting in half.

Candidly, that’s my kind of girl!  Mind you, I’m not suggesting you chop your Ruhlmann pieces in half – you might give me a heart attack – but “use what you have” (and love) is a motto we could all stand to live by a little more.  Or, as Tim Gunn might say, “make it work!” 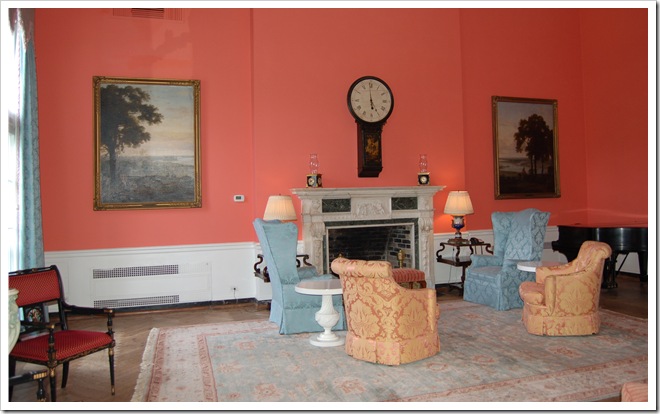 Notice the blue wingback chairs anchoring the fireplace sitting area.  Dorothy thought wingback chairs were lonely chairs by virtue of their design, and as such, always used them in pairs.

The Forum Chair was a favorite of Dorothy’s and was originally designed for the Duke and Duchess of Windsor.  Today, it is used throughout the Greenbrier. 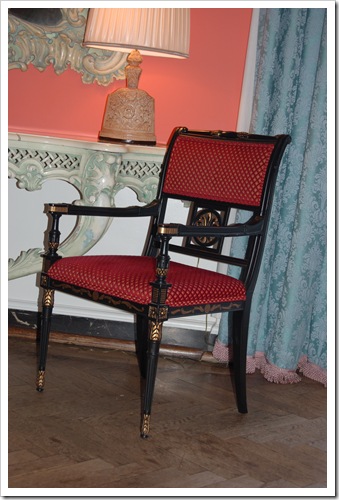 Check out the pediment on this door. I’d call it worthy of a Princess! 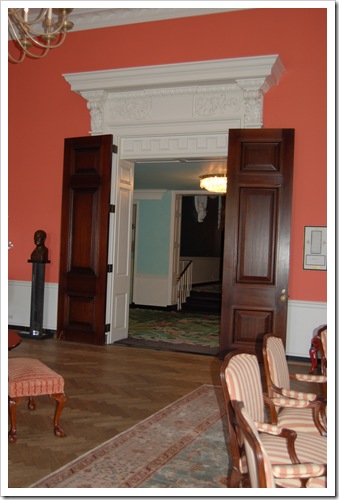 With that, Carleton ended his tour of the Greenbrier’s interiors.  Floral fan or not (and I’m often not, at least in my personal life),  I think everyone would agree that Dorothy Draper was ground-breaking … and that the Greenbrier is an extraordinary example of her talent.

Are you as spellbound as I am?

Dorothy was quite fond of saying, “If it looks right, it is right.”  More on that later this week!  Photos by moi.